Alright, check your email for your 5 free interviews!

Do You Know The Reason Why You Haven’t Reached Your Trading Goals?

I will explain in just a minute, but first...

You’ve searched for the answer.

Traded for months at a time.

Yet something is still missing…

And you want to know…

When are you going to reach your goals?

Follow along with my story to see what let me finally reach my goals, and how you can do the same. 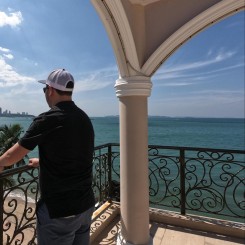 2 Years ago, things were rough.

More than rough, they were terrible.

I remember when my two big positions got closed after a margin call.

But really, I just didn’t know how to make money from trading.

Just two days earlier, I received an email from my broker telling me that I exceeded my margin limit. I had to reduce my open trades, or they would be closed out in losses.

“It’ll go back up, there’s a clear trend on the chart!” I thought.

But I was wrong. I should have closed the trade way earlier, but instead I added to the position.

I had no clue what I was doing.

It’s a good thing that the margin limits exist, or I would have lost even more money than I did that day.

My trades for the next year and a half weren’t any better.

I did know one thing though…

I knew I had to change something. If it doesn’t work, it needs to be fixed.

So I kept trading. I changed my strategy every other week. I read everything I could get my hands on related to trading.

I couldn’t find anything that had really been tested. All those websites were just giving out vague content.

I almost gave up. I started thinking that I’d never be able to trade successfully.

Finally… I came to understand something

It wasn’t my fault for not succeeding. I was given the wrong lessons.

For years, I had been told that I had to learn everything about technical analysis, and be a pro at predicting the market. No wonder I wasn’t getting results!

When I stopped focusing on predicting the market, I started to understand what trading is really about.

It’s not about understanding the economy, or predictions.

Trading is about understanding price movements and market patterns and taking the appropriate action based on that.

Once I realized that, things became simpler. I started to understand more than just technical analysis. I started to focus on the big picture. That’s when I started to grow REALLY fast.

I reached out to fellow traders…

I talked with those fellow traders about how to interpret the market. They became much better traders almost immediately.

Talking to them had a couple clear benefits:

I wanted to teach others about trading, and share with them what I know. It took me 3 full months, and a ton of trading time, but the end result was totally worth it.

I want to share an exclusive lesson with you…

Understanding The Market Is Key To Increasing Your Win Rate As A Forex Trader!

It includes two detailed videos showing you real charts and how to interpret them, a specialized workbook to get you into the right mindset, and the 4 key market phases to look for.

This course normally sells for $47, but is available for you at a reduced trial price of $7 for a limited time.

How would it feel to be able to...

The Exclusive Lesson Understanding The Market is available through a member area on this blog.

This is probably the most important lesson you’ll ever learn...

But don’t just take it from me.

Thanks for the great job with the Understanding The Market lesson. You are really connecting with us!

I recently purchased your Forex trading guide and understanding the market and found them to be useful in bringing me back to the basis (started fine with the basis but started to get confuse by mixing in too much indicators).

This is the best value for your money you’ll find anywhere. It’s not going to make me rich. The reason I’m pricing it this low is because I want everybody to be able to purchase this, and start improving their lives with winning trades.

Because of how high the prices for my other courses are, this special price is only valid for 72 hours. After that, I’ll have to raise it and you’ll have to pay the regular $47 price to gain access.

But the good news is…

You can save $40 of your hard-earned money by ordering now. (Just scroll up and click 'Buy Now'!)

I’ll take all the risk with the iron-clad DesireToTRADE guarantee:

“If you aren’t 100% satisfied for ANY REASON in the first 30 days, you will receive a complete refund.”

When you click the button to order, you will be redirected to a safe and secure checkout page where you can place your order. You’ll be able to access the exclusive Member Area to download the lesson (any time of the day, even 3AM!).

Now that you know that this offer has absolutely zero risk to you, you can safely and cheerfully click the button below and fill out the form to get the exclusive lesson:

I take on all the risk. If you aren't 100% satisfied for any reason with this Exclusive Lesson within the first 30 days after purchase, I will refund you the full amount if you send an email at support@desiretotrade.com. You have nothing to risk!

What is an Exclusive Lesson?

An Exclusive Lesson is like a full mini-course in itself. You won't find it anywhere else because the content has been taken from a premium Forex trading course and improved.

Is there a guarantee?

Yes. If you aren't fully satisfied within the first 30 days following your purchase, you simply need to send an email to support@desiretotrade.com and I will refund you the full amount.

How long until I get access to the lesson?

Immediately. As soon as the payment is completed, you will receive a confirmation email with the instruction to access the member area.

Are there other things I will need to buy?

This Exclusive Lesson will give you an excellent headstart. There are other trainings you might benefit from in the future, but they aren't required.